Nearly three years ago, when Hannah was 2 months old, she got sick. It started with a stuffy nose. Baby's noses get stuffy. We suctioned, this was kid number 4 a stuffy nose was nothing to get excited over. However her symptoms progressed and soon she had a yucky cough. So we took her to the doctor. Our doctor looked Hannah over and said it looked like a cold. But, just to be safe she sent us over to the hospital to have her swabbed for rsv. The results came back negative and so we went home. Hannah continued to get worse, she was now sleeping strictly in her car seat so we could keep her head elevated. We did everything we knew to do to keep our little baby from getting bronchitis or pneumonia. She continued to cough, mostly just at night, slept almost constantly and her appetite began to drop. I kept the car seat next to my side of the bed and slept very little, checking constantly to make sure Hannah wasn't gagging between coughs. 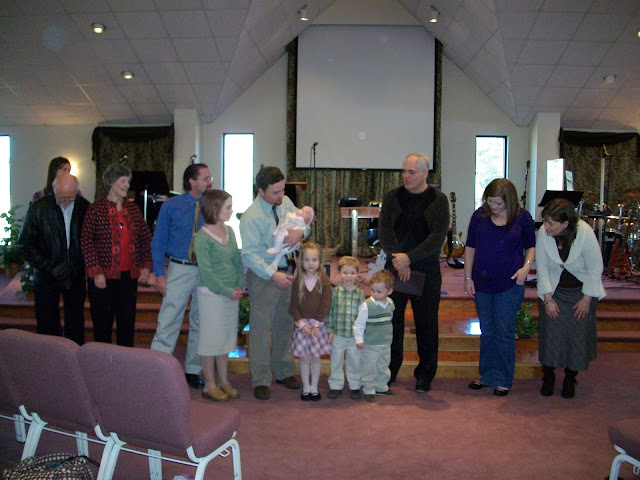 We went to Fredericksburg one weekend to have Hannah dedicated at my parent's church and then a baby shower. They prayed over her at Journey Church that Sunday morning. Anxious moms gathered around Hannah later that afternoon, concerned. Several of them tried in vain to get her to eat. Most of them begging me to have her taken back to the doctor. I assured them she had another appointment the very next day at home.

That night, in the middle of the night Hannah did begin to gag. We were back home now. She was once again next to me - propped up in her little car seat. I woke my husband up in the middle of the night and told him that Hannah was so congested she was having a hard time breathing. Immediately he was up and had he and Hannah in a steamy bathroom, the shower water on as hot as it would go. I reminded him we had an appointment with our doctor first thing that morning. But that still being 7 hours away, Jarrod decided she couldn't wait. In between her coughs her skin was turning blue. Breathing had become very difficult for Hannah, her cries were quiet and when she was not working to breath she was sleeping.

Jarrod set out around 2:00 that morning for the nearest hospital 20 minutes away. She was monitored for awhile, another rsv test was done and came back negative. The emergency room doctor deciding there was nothing more to be done, told my husband we just needed to be suctioning her nose right before feedings (though feedings had become nearly non existent by this point and the doctor was informed of this) and sent in a nurse to, "show him how to do it." Father and patient were then sent home even though Hannah's blood oxygen level was 88 during her time in the ER.

Jarrod called with the update on his way home and I WAS LIVID! We both knew enough to know that a blood ox of 88 was not good news. Jarrod called our family doctor and described his visit to the emergency room. She hesitantly called in a decongestant, there was not much they could give Hannah since she was so young.

A few hours later we were all dressed, took our oldest to school and, not knowing what else to do, headed back to the nearest town to pick up the decongestant.

I am SO thankful for the wisdom my husband displayed next. In the parking lot of HEB in Hondo, Texas Jarrod dropped his head and prayed a simple prayer for help. Neither of us were comfortable giving her the medicine, especially when the doctor seemed so unsure herself. But we felt so lost. After his prayer Jarrod drove us to McDonald's. He told me how ridiculous he felt with our baby struggling just to breath and here we were headed in for burgers and playtime. He felt the Lord telling him, "Wait". We waited, the boys played. We picked at food, no interest in eating, and we waited. Jarrod had paged his aunt sometime earlier that morning. She is a pediatric nurse practitioner at a teaching hospital in California. Aunt Jonelle has been called too many times to remember for medical advise and we have come to really trust her judgement. As we sat in McDonald's obeying God's word, simply to wait, not knowing really what we were waiting for, the phone rang. Jarrod explained things to his Aunt, she recommended we take her to a hospital in San Antonio for a second opinion. We wasted no time throwing away nearly whole hamburgers and loading three kids into the car.

An hour later we were in a small room at Methodist Children's hospital. Hannah was on oxygen, and had tested positive for rsv. We had not even had a chance to sign our baby in before a nurse had glanced at her, rushed us through the doors, calling her an emergent case, and immediately getting the oxygen mask on her.

She spent a week in the hospital and received excellent care. It took me nearly that entire week to "get over" how poorly Hannah had been treated at the other ER. To fathom how we got two negative rsv results, one of them just hours before the positive test. 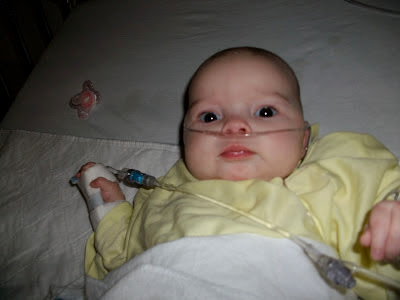 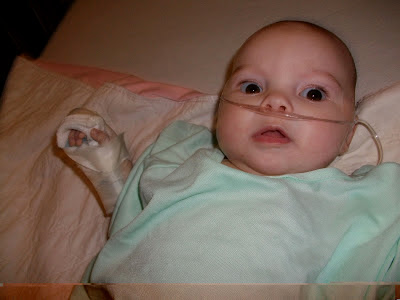 Oh to be so mature and confident in the Lord's work in every detail of our lives. I wish I functioned with a lot more foresight and a lot less hindsight. Weeks later, when I would look back at the events before Hannah's hospitalization, I would see so clearly God's hand. I shared with Jarrod some of these new insights and in the midst of the conversation it hit me, and I told him. "Really if you look at it this way you really can't be offended with anyone."

You see, if Hannah's rsv tests had come back positive, like they clearly were. If the emergency room doctor in that tiny hospital in Hondo had been concerned about her blood oxygen level and admitted her, there we would have stayed. In a small town hospital not equipped to handle such serious respiratory problems as our sweet Hannah was experiencing.

Methodist Children's Hospital has a fantastic respiratory department. I am not sure she would have gotten better if we had not been in a bigger hospital that was designed strictly to care for children and babies. God's hand in things does not always look like I think it should. I would love for it to be obvious and seamless. But often times His hand is in the obnoxious co-worker, it is in the middle of a long line of traffic, a doctor who seems inept. He is in the midst of lost jobs, dwindling paychecks and sick family members - working, always working for our very best. Thank you Lord for using bad judgement and inaccurate tests to save my sweet baby's life!

Linked up Here and Here
Posted by Sarah Brooks at 9:00 AM